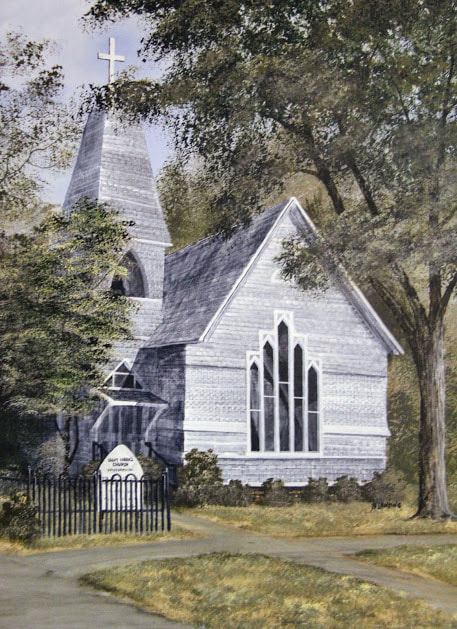 St. Mark's Church 1896-1965
The origins ​​of St. Mark's goes back to 1866 as Dalton endured the bleak uncertainties of the Reconstruction era immediately following the Civil War. "War and the the torch have left us very poor", wrote the Wardens and Vestry to the Diocese of GA in 1867, but with remarkable optimism, a cornerstone was laid in 1869 for a building capable of seating 300. Over the next generation the congregation's growth was modest, however, and in 1896 a smaller church was built, seating about 100.

For the next six decades St. Mark's languished, reduced to the status of an organized mission and surviving only through the tireless dedication of a small core of laypersons. In the early 1950's national church authorities recommended the closure of the church, but thanks to sympathetic support from the Diocese of Atlanta, a new era began in 1952 with the appointment of a resident priest who was the parish's first genuine pastor. Under his leadership and that of his six successors, St. Mark's grew from an aided parish on the periphery of the diocese to that of a "program" church. In 1965 the congregation built the present facilities, which were expanded in 1978 and again in 1988. From this place it established a tradition of diverse and penetrating outreach to the community that has ranged from an ongoing inclusive preschool for both typical and special needs children to the founding of the local Hospice movement to the opening of a medical clinic for low income and homeless people.

After 20 years of ministry at St. Mark’s, the departure of Reverend Charles Dean Taylor in 2010, along with the devastating  impact of the economic recession on the local economy, had a profound influence on the on the spirit and strength of St. Mark’s. The following seven years brought a series of changes and turnover in the leadership of the church clergy.  These ministers to St. Mark’s faced the challenges of decreasing budgets, smaller administrative staff, and difficulties in parochial ministry. These circumstances led the church to a period of conflict and uncertainty. The Rev. Beth Royalty, along with the vestry, started the church on the path of discernment of who we are as a church family and what we are to become as a church working in love within our walls and within our community.

The spring of 2017 was a period of celebration for St. Mark’s.  Our 150th anniversary as an Episcopal Church included the Bishop, the community, current and former members of the parish and several former Priests.  The two day observance brought us together in worship, thanksgiving, fellowship and honor of the history of St. Mark’s.  The arrival of our current Interim Rector,  The Rev. Susan Butler, in February 2017 has brought new inspiration and direction to St. Mark’s.  Our church has achieved a new level of stability under her leadership and the vestry and the parishioners have found renewed  dedication and energy.  Together we are completing a path of discovery, are achieving financial stability, and have become a more harmonious church.  Now over halfway through its second century, St. Mark’s looks to the future in a spirit of service, outreach, and joy; worshiping  together as we continue on God’s journey.