Leading St. Mark's life and ministry is a shared responsibility of members, clergy and staff.   The Staff includes professional worship leaders and administrators. Many other members are involved leading ministry teams and groups.  You will find more information about those areas under MINISTRY. 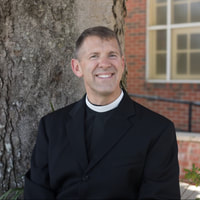 Father Rick Tiff was born in Arcadia, California and grew up living in North Dakota, Massachusetts, Germany, and throughout the state of California. After earning a BA in History at the University of South Florida, he attended Fuller Theological Seminary in Pasadena, CA with a focus on pastoral counseling.  Upon graduation from seminary, Chaplain Tiff became a youth minister for six years in California.  He was ordained an Episcopal Priest on January 2006 in the Episcopal Diocese of Los Angeles.  After ordination, he worked at St. Margaret’s Episcopal Church and School for three years. His responsibilities included serving in the parish, teaching religion, and developing a community outreach program for middle school students.  In September 2008, Rick began his active duty career as a Navy Chaplain.  After graduating from Officer Development School and Chaplain School in Newport, RI, he was assigned to Naval Mobile Construction Battalion Three (NMCB3) in Port Hueneme, CA.  As the Command Chaplain, he deployed to Europe and Africa in August 2009 in support of nation building efforts.  He was promoted to the rank of Lieutenant in September 2009.  Chaplain Tiff deployed again with NMCB3 to Camp Leatherneck, Afghanistan in November 2010 for six months. In August 2011, then Chaplain Tiff was assigned to Pearl Harbor Memorial Chapel at Joint Base Pearl Harbor-Hickam where he served as the Deputy Command Chaplain, chapel pastor, and contracting officer.  In September 2013, he served as Battalion Chaplain for 2d Battalion 3d Marines and deployed to Camp Hansen in Okinawa, Japan and The Republic of South Korea.  In August 2018, Rick was the Deputy Chaplain at Naval Air Station Pensacola and served on the staff at the instillation chapel.  LT Tiff’s ministry focus was providing pastoral support for United States Navy air control and the United States Air Force training squadrons on base.  Currently, he loves the opportunity to do more preaching and pastoral care. Rick is also enjoying the close proximity to outdoor mountain living as well as access to urban amenities in Chattanooga and Atlanta.    Father Tiff also holds a Diploma of Anglican Studies at The General Theological Seminary in New York, NY.  His personal decorations include a Navy and Marine Corps Achievement Medal and three Navy and Marine Corps Commendation Medals.  Rick enjoys running, hiking, scuba diving, theater, traveling the world, studying architecture, and snow skiing.
You can contact Fr. Rick at rick.tiff@stmarksdalton.org 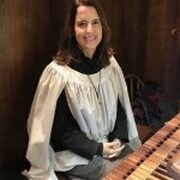 Beth Nichols joined the St. Mark’s community as organist and director of music in April of 2016. Previously, she served 10 years as organist/choirmaster for Church of the Nativity in Fort Oglethorpe, GA. In addition, she has served since 2003 as organist and pianist for Mizpah, a Reformed Jewish congregation in Chattanooga, TN. She is an active member of the Chattanooga chapter of the American Guild of Organists (AGO), having served as both Sub-Dean and Membership/Hospitality chairperson. A lifelong choral enthusiast and singer, Beth received a B.S. Sacred Music degree from Tennessee Temple University in 1993, presenting recitals in voice and piano. Several years later, after having discovered the Episcopal church and the beauty of liturgical worship, she became drawn to the pipe organ; it took only a couple of lessons to know she had found her niche. She took several years of organ study, and her teachers include Dr. Walker Breland (Univ. of TN-Chattanooga), and long-time Episcopal church organists Mary Ellen Meloan and Dr. Keith Reas (Chattanooga). In 2015 she completed a week-long master class workshop with noted American organist Dr. Wilma Jensen. Beth continues to sing whenever possible, and has been a member of the soprano section for many choirs, including the Lexington Singers (KY), Chattanooga Symphony & Opera Chorus, Chattanooga Bach Choir, Choral Arts of Chattanooga, and the Voice of Reason Women’s Ensemble.
Beth can be reached via e-mail at beth.nichols@stmarksdalton.org

Nancy Osborn has been the Parish Administrator since March 2022.  The Osborn's relocated to Dalton in February 2021.  I was raised as an Episcopalian and attended Trinity Episcopal Church in Columbus, GA.  I have four daughters, one of which I took into my home when she was 17 years old.   I have 7 of the most precious grandchildren in the world!  I am an avid crafter and enjoy making cards, coloring with alcohol ink markers and water coloring.  I have large, nicely "stocked" art studio with a wide variety of products to keep me busy.   You can reach me at admin@stmarksdalton.org.

VESTRY
The Vestry is an elected governing board whose members have designated responsibilities and serve for three year terms. The Senior Warden is appointed by the Rector for a one year term, and the Junior Warden is elected each year by the Vestry.

One of the relatively new jobs in the worship area at St. Mark’s is that of verger.  The office of verger goes back as far as the 12th century in the Church of England. If you see coronations or royal weddings from England, the procession is led by a verger. Originally the verger’s job was to lead the procession and clear the animals and riffraff from the aisles so the bishop could make his way.  It is traditional for the verger to go first in the procession, but at St. Mark’s and several other churches in our diocese, the cross goes first, followed by the verger.  At St. Mark’s, the verger organizes the acolytes and checks to be sure Eucharistic Ministers and lectors are all present.  The verger may also act as crucifer, gospeler , Eucharistic Minister or lector.  In a nutshell, the verger takes care of the details so that the service flows smoothly.  The verger carries a ceremonial rod called a virge.  The typical robe of a verger is a black open front gown worn over a black cassock.  We have 2 verger gowns, one trimmed in black velvet and one trimmed in red velvet.  Some of the vergers in our diocese have gray robes.  Twenty years ago vergers were found only at the cathedral or in larger churches.  Today there are over 275 vergers in the Diocese of Atlanta. ​
© 2020 St. Mark's Episcopal Church Dalton, GA